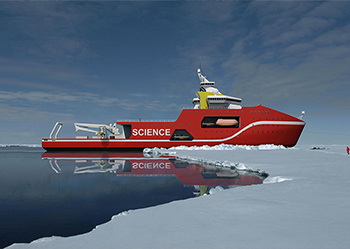 Houlder is delighted to see the RRS Sir David Attenborough Polar Research Vessel keel laid.  We have been involved in its procurement from the very earliest stages, providing the National Environment Research Council (NERC) and British Antarctic Survey with the specification and initial concept design.  We recognise that this marks a significant milestone in the development of UK Scientific exploration and shipbuilding industries.

In April 2013 George Osborne announced that £200m would be invested from the government’s capital investment fund for science into a Polar Research Vessel (PRV). This vessel would be one of the most advanced Polar Research Vessels in the world and the most advanced in the UK fleet. British Antarctic Survey (BAS) is currently operating 2 other PRVs but the RRS Sir David Attenborough will be adding much needed modern capabilities. The vessel is due to enter service in 2019 but for Houlder, the design journey started in 2013.

Houlder started working with NERC in 2013 to develop a statement of requirements. This required quantifying the requirements into something that could be measurably achieved and understood by a naval design team.

Once a list of clear requirements was created and agreed upon, Houlder worked on a proof of concept design. The vessel was going to need to be able to travel deeper into the ice than the previous PRVs. This meant the RRS Sir David Attenborough Polar Research Vessel needed to be capable of doing 3 knots while breaking 2m thick ice flows. Being in remote locations it would need to operate for 80 days at a time without resupplying. It would need living space for up to 60 scientists and support staff. It would also need a helipad and the ability to launch unmanned flying drones and remotely operated underwater vessels (ROVs).

These requirements helped to shape what equipment and space the PRV would require. From there Houlder was able to make a general arrangement drawing a 3D rendering. Knowing the requirements, the concept has a length of 130m and the vessel features Cranes, on-board labs, ocean survey and sampling equipment. One of the design suggestions that Houlder made based on experience in other vessels that require access to the water and sea bed analysis is a moonpool. This is an in-ship access space to the sea that allows easy and contained access. This posed some questions on containment and possible sample contamination. So Houlder conducted a thorough feasibility study on its effectiveness and safety. The moonpool will allow scientists to deploy equipment and sensors remotely from a control room accessing a maximum depth of 9,000m.

Once the vessel design was at a point that all requirements were met and agreed, Houlder then produced the tendering documentation. As part of the EU tender, bids were also invited from outside of the UK. This needed to be considered when writing the tender and making it clear what would need to be delivered and by when.

Once the tender had been agreed and Cammell Laird were selected as the shipyard to build the RRS Sir David Attenborough Polar Research Vessel, Houlder changed roles slightly. While still representing BAS and NERC, Houlder now works with the shipyard and Rolls Royce who are doing the detailed designs and supplying the major equipment, to ensure detailed plans, equipment selection and any revisions will continue to meet the customers vision and requirements. This role requires an in-depth knowledge that comes from our 30 years of experience and our intimate knowledge of the ship and customer’s key requirements. Houlder is fully independent and has a long track record for delivering results and looking out for the best interests of our customers. This makes us an ideal choice for representing ship owners’ interests as we have done throughout the RRS Sir David Attenborough Polar Research Vessel procurement journey.