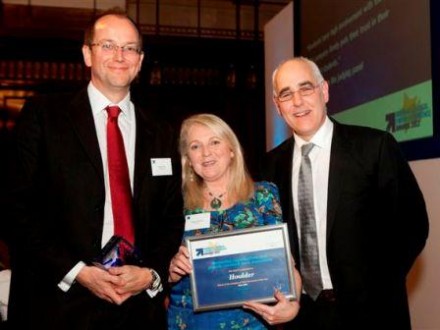 The National Council for Work Experience Awards received a record number of entries this year, with around 200 organisations from across the UK competing for a total of 28 awards.

The judging panel represented the full internship placements process through a number of senior professionals, including specialists from Which? and Regent’s College. They were impressed by the multicultural and multilingual aspects of Houlder’s scheme.

The winners were announced at a glittering ceremony at Merchant Taylors’ Hall in London by Dr Paul Redmond from The University of Liverpool, one of the UK’s leading experts on graduate employability and the Association of Graduate Careers Advisory Services President Elect.

Margot Freeman Houlder HR Manager (pictured) commented “We’re delighted to have been recognised by NCWE. At a time when many companies are cutting back, we remain committed to continuing to take advantage of the graduate talent pool from both the UK and overseas – consistently gaining tangible business benefits by doing so”

Mike Hill, chief executive of the Higher Education Careers Services Unit, which operates the NCWE says: “We’re now in the ninth year of the NCWE Awards, so it’s good to see so many new companies entering as well as organisations that take part year after year.

“Over the years we have seen a greater number of SMEs entering the awards and so have developed them to ensure they are well represented. Smaller companies tend to offer very unique schemes with lots of opportunity to work across many different areas of business, ensuring interns develop a wide range of skills.”

The NCWE Awards recognise internship placements in businesses from all sectors and sizes that provide exceptional student and graduate internships. This year’s sponsors include the AGR, Changeboard, GlaxoSmithKline, Centrica, Holiday Extras, CRCC Asia, PlaceNet and Intel.