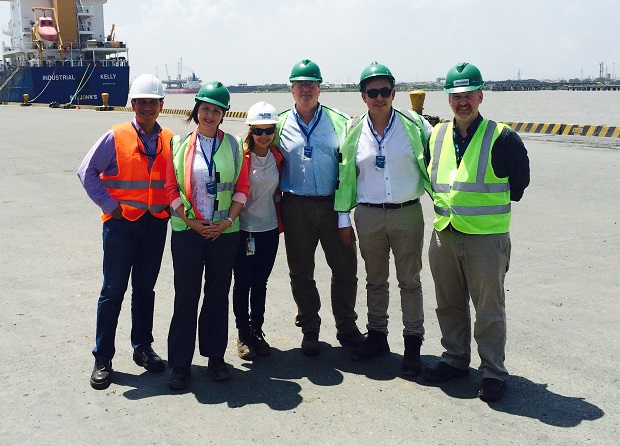 Houlder demonstrated its continued international ambition by attending a Trade Mission to Colombia arranged and led by business development organisation NOF Energy in partnership with UK Colombia Trade. The mission was specifically aimed at supporting the Colombian supply chain on its Caribbean Coast – an area where an initial investment USD1.5 million is projected in offshore oil and gas exploration.

Members of the Trade Mission visited local offshore facilities, met with Britain’s Ambassador to Colombia and attended a Business Conference arranged by the Chamber of Commerce of Barranquilla – the largest city and port in the northern Caribbean Coast region. The Chamber is committed to preparing local companies to make the most of offshore Oil & Gas opportunities over the next four to five years.

Garry Kennie (pictured far right), president of Houlder Americas who attended the mission commented; “The growth in the energy sector along the Caribbean Coast Region of Colombia has an exciting future and we are very pleased to be part of it. We already operate out of Trinidad as well as Houston and the UK. We look forward to entering the region and exploring the many opportunities.”

Caroline Lofthouse, Business Development Manager from NOF Energy,  commented, “Colombia is a growing market for the offshore sector, which presents strong opportunities for UK companies such as Houlder that can offer skills, products and services that add value to projects in the country.  Our trade mission was very successful and facilitated a number of new connections that have the potential to be fruitful for our members.”

Houlder announced the opening of a Houlder Americas office in Houston in April 2014. The company earned a top five place in The Sunday Times’ 2015 Fasttrack 200 list for International Sales and the company’s participation in the Colombian Trade Mission continues this investment in the company’s global reach.